Racing Concept of the Month #2

The “racing concept of the month” articles are way of sharing the general racing knowledge that has been developed over the decades in the Martin 242 fleet – this is the second of a series. All are loosely based on the excellent content in this article by Michael Clements.

I need to get better starts! 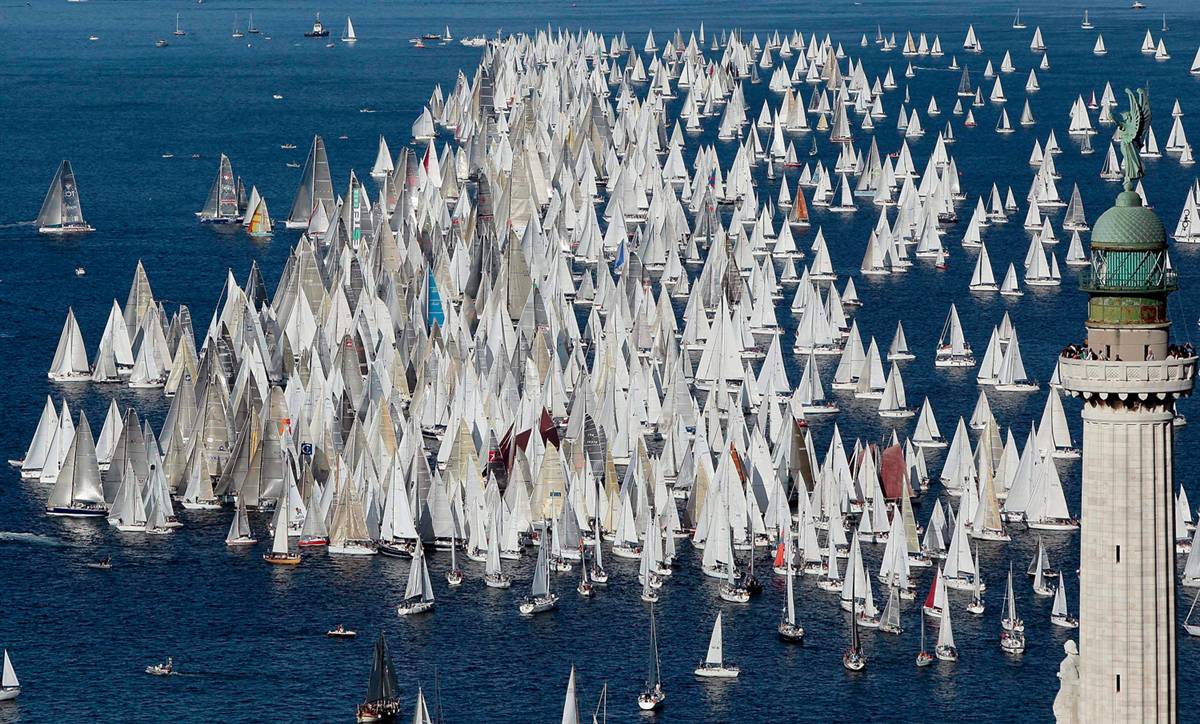 1,800 sail boats taking part in the "Barcolana" regatta in the gulf of Triest - photo credit unknown

There are four basic ingredients to getting a good start. At the start gun:

Easier said than done! Here’s some thoughts about how to accomplish these goals in a typical Martin 242 fleet start.

Your goal should be to be at about 80% of your maximum speed for the conditions at around 10 seconds to go, and full speed at 5 seconds to go and about 2 boat lengths below the line. If you come from a dinghy racing background, luffing sails and parking near the start line with not much time to go won’t work – it simply takes too long to get the boat up to speed. Remember that the M242 with full crew is a heavy boat and takes up to 10 seconds to get going in breeze, and the lighter the wind, the longer it takes – sometimes as much as 30-60 seconds in very light air. Likewise, if you’re on the line too early your only recourse may be to bear off and reach down the line. This can work if the start line isn’t too crowded, but in a typical Martin 242 fleet race you’re likely to run into several leeward boats trying to protect their lane by luffing, forcing you over the line early.

So again, your goal should be full speed at around 2 boat lengths below the line with around 5 seconds to go.

There’s a few tricks you can rely on to help pinpoint your boat’s position relative to the line:

High tech
Use a Velocitek (or another GPS-based start line indicator) to ‘ping’ the line before the start. I personally find that sometimes keeping track of both the distance to the line & time to gun on the instruments can be a bit of information overload for the helm in the last few seconds before a start. One solution is to pick a dedicated crew member who is not handling a sail to count down both time to gun and distance to the line. I like to use boatlengths instead of meters or feet to avoid confusion with seconds, and it’s easier to visualize for the helm. So something like “30 seconds, 2 boatlengths to go”… “20 seconds, 1 boatlength”… ”10 seconds, we are over”…

Make sure you check that the Race Committee has not changed the start line during the last 5 minutes, and if they have, make sure the Velocitek gets updated. Some RC’s change the line even during the last minute. 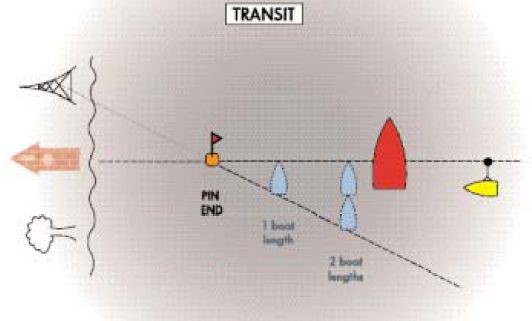 Lowest tech
Use other boats. Just line your boat up with the nearby competition on the front row, and make sure your bow is poked out slightly when the gun goes off. Guaranteed good start. The risks are twofold: of course if the boats around you are over early, or close, the RC might pick out your bow and give you the old OCS. Equally likely is everyone is playing the same game and it drives a General Recall. Secondly staying with the pack might mean you miss an opportunity to be correctly on the line if everyone is late to the start. But as a general rule of thumb – try not to be too far behind whoever’s punched out furthest when the gun goes off.

This basically boils down to not having to deal with any disturbed air from other boats for the first several minutes after a start. This means starting far enough away from other boats that you will have this clear air after the start. Two keys to accomplish this are:

This is likely the least important of the factors. Often to win or do well in a race you will have to be at or at least near the favoured end at the start, but just as often you can succeed without. Trying for a start right at the pin or Committee Boat is high risk, and only very experienced starters will come out alive from these two corners, and meanwhile there was probably lots of room mid-line…and clean air…

Also keep in mind that, while the ‘favored end’ of the start line is the end furthest upwind, being furthest upwind may not be as important as starting near an end that allows you to get towards stronger wind, or a favored windshift, or better current.

Putting it all together:

Sticking to one or two standard approaches to starting can help maximize your chances of achieving the four key ingredients above.

This is probably the easiest and most reproducible starting technique. The goal is to be on port tack sailing 5-6 lengths below the line at around 45-60 seconds to the gun. If there’s enough wind, I set myself up to be passing the pin at a predetermined time so that I’m approximately at the right part of the line at the gun. For example, if it takes 90 seconds to sail down the full length of the line, and I want to be starting near the boat end, then I’ll aim to be sailing past the pin at around 2:00 to go. If I prefer to start closer to the pin I’ll aim to be at the pin closer to 45sec or even 30sec to go. At 25-30 seconds in good breeze (up to 45seconds in very light air) tack to starboard into a nice hole with space to leeward. This should give you time to finish the tack, luff up to the line, bear off into the hole to accelerate and hit the line right at the gun at full speed, and in a nice lane.

It can be trickier to find a good hole, but this approach is sometimes simpler especially if you’re planning to start near the boat. The keys here are not to get hung up above a bunch of boats to leeward unable to bear off and accelerate, or trapped ‘barging’ above the layline to the boat, or stuck to leeward of a big pack in light air. Again starting 5-6 lengths below the line, aim for a spot on the line slightly below a close-hauled course and time your approach. Ideally you can carry enough speed to carve up tight underneath one of your competitors that’s moving slow and accelerate thru their lee just before the gun – it’s devastatingly effective if done right.

See you on the start line!
-written by Reto