Racing Concept of the Month #4

The “racing concept of the month” articles are way of sharing the general racing knowledge that has been developed over the decades in the Martin 242 fleet – this is the fourth of a series. All are loosely based on the excellent content in this article by Michael Clements. This article is also inspired by some math done by 4-time M242 NA’s winner Matt Alexander.

The downwind leg in a Martin 242 is all about Velocity Made Good – VMG. So, what are we even talking about? What is it? How does it work? How can we use this secret power to win more races? Most of us understand this concept intuitively, but it’s time to have some fun and dig into the details…

VMG is defined as the cosine of the difference in degrees between the course sailed and the intended course, multiplied by boat speed.

Looks like we’ll have to dredge up some old high school trigonometry to understand this one fully (thanks Pythagoras!) This picture might clarify a bit: 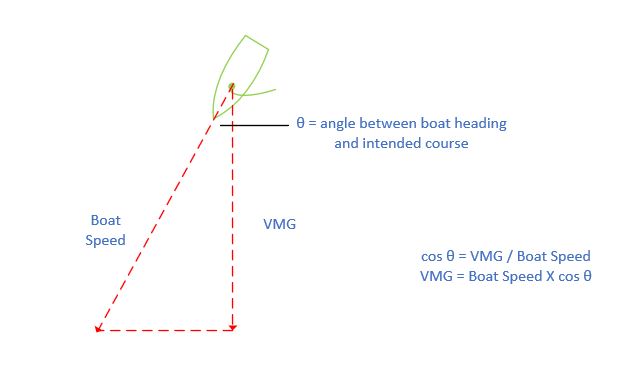 Some examples to hopefully clarify:

Example 1 – here’s a graph of a boat going the same 5 knots of boat speed, but at different angles to the intended course (in this case, a mark). You can see as angle to the mark increases, VMG drops. Eventually VMG hits 0 knots when you’re at 90 degrees to the mark – you’ll never get there! 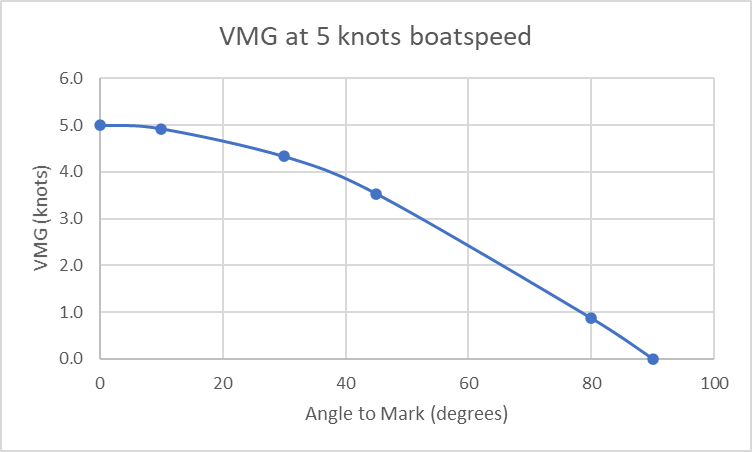 Example 2 – Here’s a graph showing how fast a boat needs to go to maintain the same 4 knots of VMG as the angle to the mark increases. As the angle starts to approach about 45 degrees you must start going really fast to maintain your VMG. 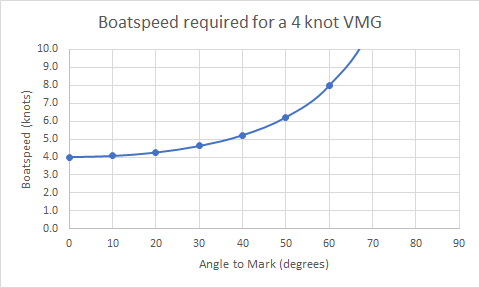 I know what you’re thinking by now. Pretty graphs and all, but so what? I want to WIN RACES!

The problem of course is that on a downwind leg, where we’re trying to go (the leeward mark) is often dead downwind. The closer we sail towards the mark, the more boat speed drops (in most conditions – but we’ll cover that later…)

The point is, there’s always a sweet spot! Finding this sweet spot depending on wind strength, wave angle, currents and the rest of it is what VMG sailing is all about.

Here’s a made-up example that arbitrarily shows boat speed dropping as angle gets closer to dead downwind (0 degrees = dead downwind). I made this up, but it demonstrates what happens in real life. Notice…Sweet Spot! Right around 30-40 degrees away from downwind in these conditions you get maximum VMG. 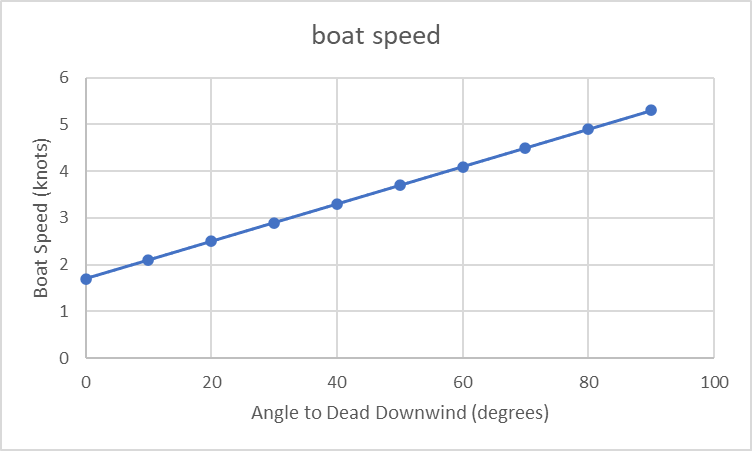 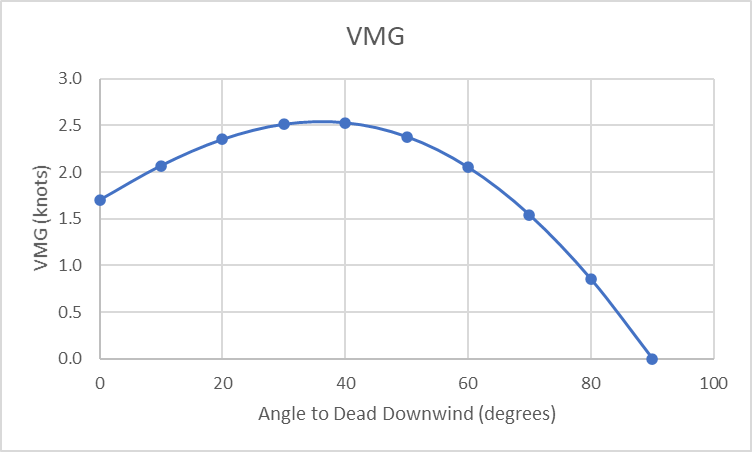 So now that you know about this sweet spot superpower, how does this all play out in practice?

On the Martin 242 when it’s Very Windy (say 15 knots + of windspeed) your course can be almost dead downwind, or even by the lee a little bit, without sacrificing VMG. Typically, the closer you can point to the leeward mark the better, and it’s not possible to improve VMG by pointing higher. This is because the boat is already close to or at hull speed, and you won’t really go much faster by pointing higher. You often have to head up a few degrees just for stability, so you don’t rock and roll too bad. Default to sailing lower.

When it’s Very Light (0-3 knots) – it’s survival sailing downwind. You need to do whatever it takes to keep the kite full and pulling. The boat speed drops to near zero without a kite pulling in light air, which means VMG will be near zero. You might have to sail VERY high angles to accomplish this. Even if it’s possible to keep the kite full at a lower heading, you need to stay at least 45 degrees or higher from downwind for max VMG. On Back in Black when it’s very light we are often as high as 70-80 degrees to dead downwind, nearing a beam reach! It always seems to be beneficial to keep the boat moving as fast as possible. Default to sailing higher.

The real art and science of going downhill quick in the M242 happens between these two extremes of wind speed – which also happens to be the wind conditions we most often race in around Vancouver and the Pacific Northwest. In these conditions relatively small changes in wind strength or heading can have a big impact on VMG. Waves and chop can also be a big factor – the flatter the water the lower you can point without sacrificing VMG. For example, lighter air and leftover chop will require higher angles.

So how do you know you’re in the sweet spot of optimal VMG?

My rule of thumb is to always be sailing a little bit lower than you think is right – in the Martin this often “feels” a bit slow. Heating up a few degrees will often improve boat speed quite a bit, the sails and helm will load up and it will feel great – but beware as your VMG often suffers. Too low is equally bad of course, you’ll just start to wallow.

The default is to look at the boats around you – don’t be the highest, don’t be the lowest. The fleet has a magical way of intuitively crowd sourcing to find the optimum VMG for the average conditions. With no boats around I default to putting the Windex vane right on the indicator arms as a starting point – which on our boat is around 150 degrees apparent wind angle (or about 30 degrees from dead downwind). This is also good spot to aim for when you’re first bearing off to go downwind (in the absence of any other tactical considerations).

After you’re close to the average – it becomes a question of fine tuning in all the little puffs and lulls and waves. Communication between the helm and spinnaker trimmer becomes very important – the kite trimmer has the best feel for the pressure, and with practice they will often have a better idea than the helm of whether VMG is optimal. On Back in Black it’s pretty much a non-stop discussion/argument between helm and kite trim - bear off in the puffs, head up when it gets soft. The kite trimmer is really driving the boat. All this is done through very small adjustments in the tiller, coupled with small shifts in crew weight as required to steer.