Tweakers, And Why They Are a Good Idea in Windy Conditions
Written by Michael Clements, July 11, 2021

So, there you were, blasting downwind in 25knots of breeze and you just experienced your first windward death roll or leeward broach. It's a joy that every new Martin 242 owner looks forward to and eventually experiences (or may be blissfully unaware of what’s coming) - sort of a rite of passage in the Class. It's our version of "hazing". And you'll know you really did it right if you pegged the mast in the water for up to 20 seconds and ejected one or two crew from the cockpit or the deck in the process (two gets you a higher point score and bragging rights. Three ejections would be epic.)

To digress somewhat (but to reinforce why this article has been written in the first place), this actually happened - just ask Rick Howard & Steve Johnson about an epic "End of Summer Hummer" event in Sylvan Lake, Alberta, back in 2009 or so while yours truly was steering their boat with Rick's wife Tracey on board in 30+ knots of wind, trying to beat Mike George, Al Barnes, and co. Steve chose to jump out of the rear end of the cockpit when the mast was pegged in the water, probably because he was rattled by the sight of Rick lying spread-eagled on his back on the mainsail, essentially floating on the water like he was on a waterbed, but dry as a bone - one of those things you just never forget. Or perhaps Steve thought the boat was going to turn turtle and sink – you’ll have to ask him (we never got around to it). We eventually sailed upwind 200 yards and picked up the marginally hypothermic Steve and went on to finish 2nd in the race - he was a good sport about it. (And boy is it hard to drag a 200-pound man into the cockpit when he's tired, cold, wet, and it’s blowing 30 knots and wavy...)

Anyway, back to the article...

So, after your epic wipeout you were probably wondering:
Well, there is an answer, and it's called...

Tweakers.
One of the reasons you did your windward death roll or leeward broach in the first place is because the spinnaker probably (almost certainly) started oscillating side-to-side just before the wipeout, and at some critical point you felt the rudder lose traction in the water, and BOOM! - that's all she wrote. Once the rudder stops being a rudder, you are toast, and it happens in a flash. The other way to wipe out is to be surfing down the face of a wave, bury your bow in the wave ahead, lurch to a bit of a halt, and then the spinnaker instantly loads up with wind and you wipe out.

Here’s a sequence of events from the 1983 Sailing Life “Ark Regatta” in Vancouver, where the newly-launched 242 was stacked up against other prevalent One Design keelboats of the era (the 242 came out on top), and yours truly was steering one of the 242’s on a windy day. It all started out fairly easy with a mild easterly wind, but it quickly built to 15-20 knots, and this led to the eventual wipeout. 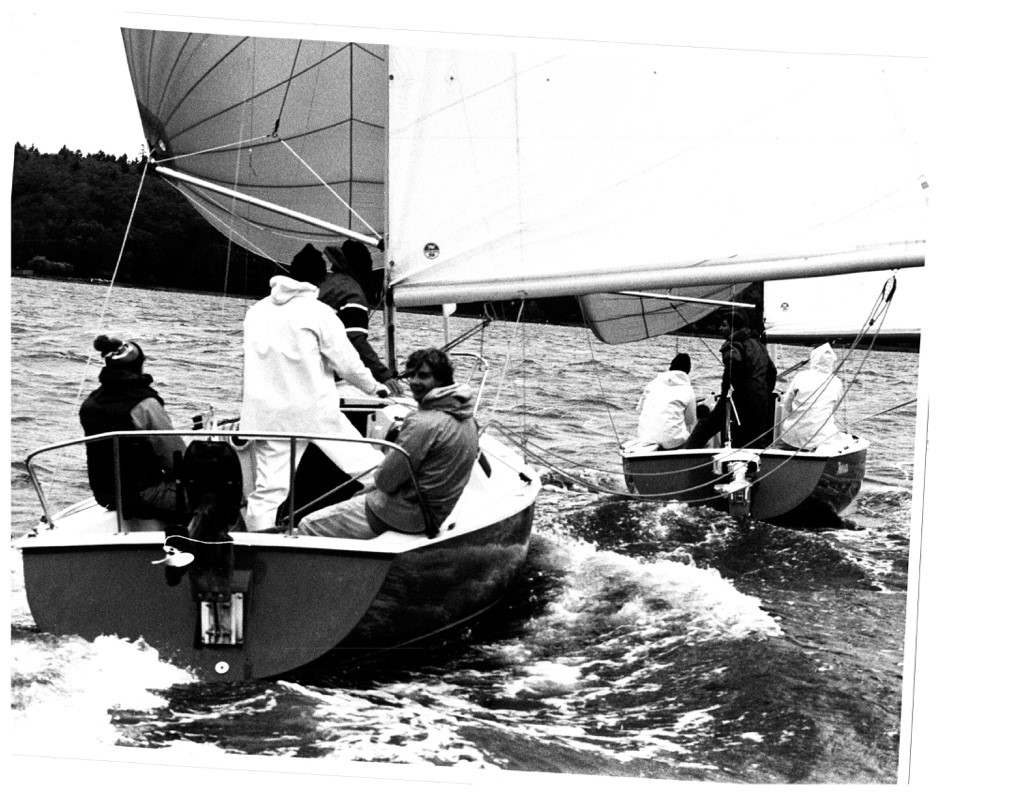 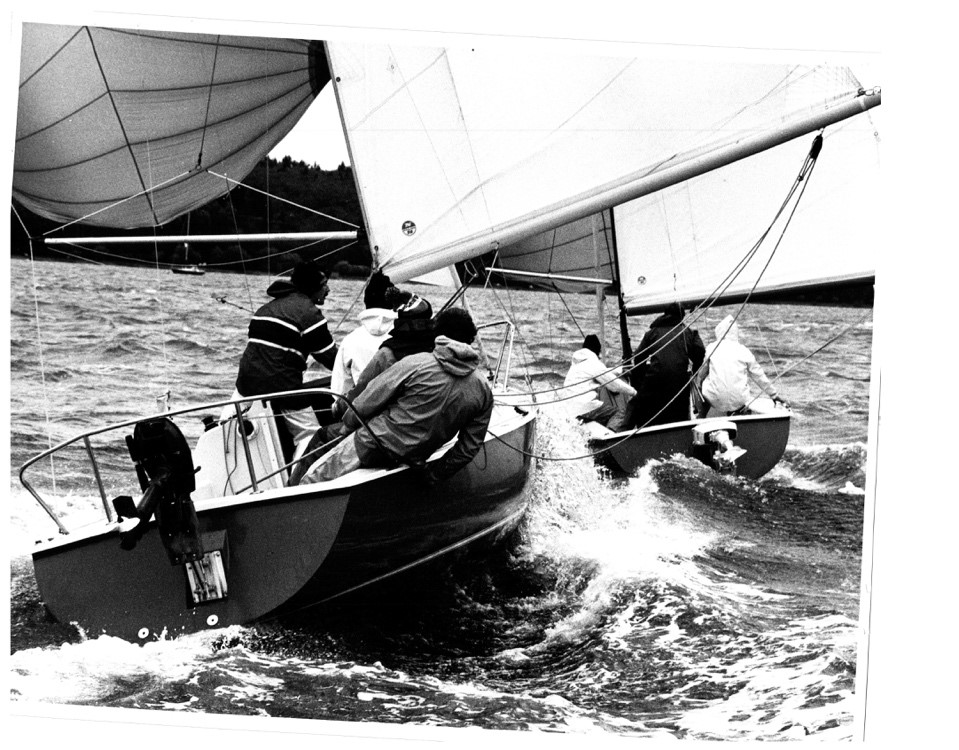 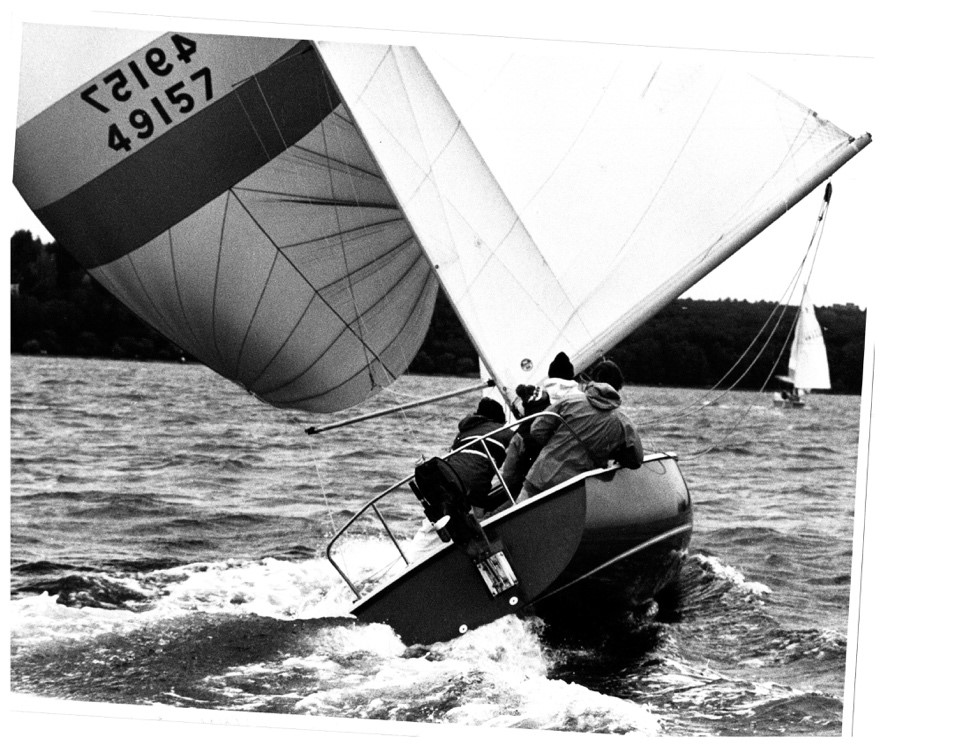 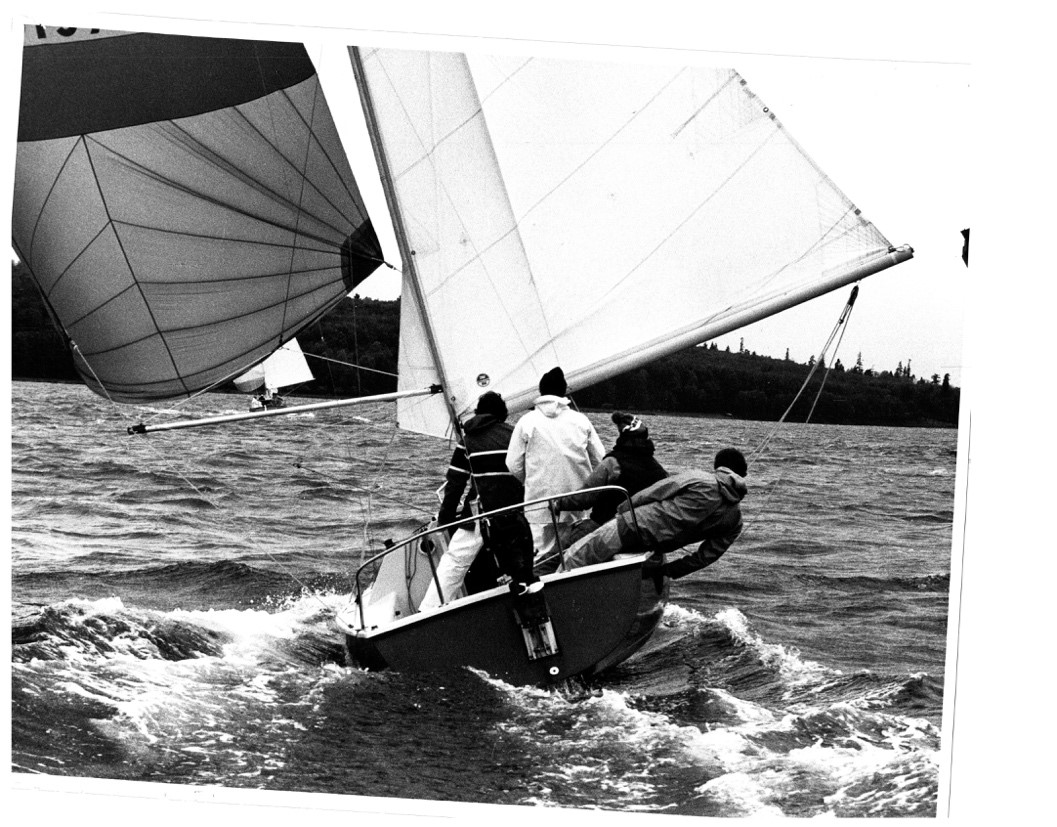 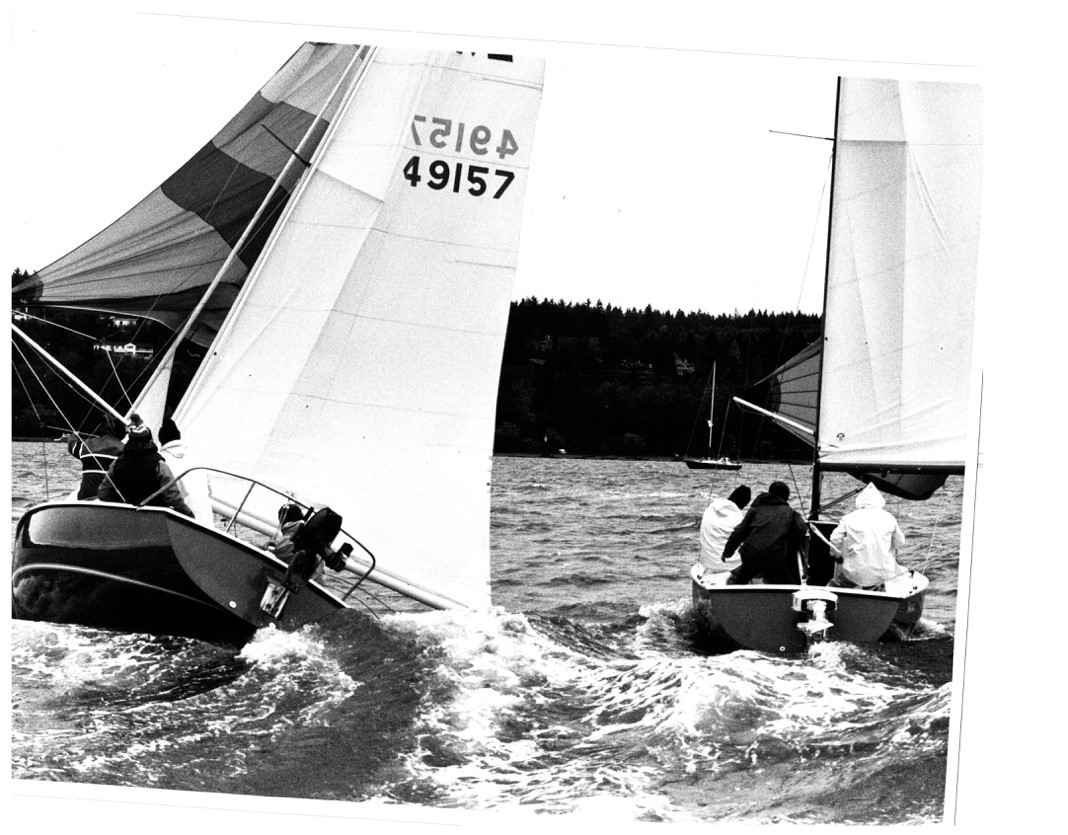 When the spinnaker starts oscillating you are pretty much doomed, because the "pulling point" of the spinnaker sheets is at the aft turning blocks on both sides of the boat: right where you don't want that force in 20-35 knots of breeze because the stern gets yanked one way or the other and you have to steer like crazy to keep the boat centered under the spinnaker (remember that rudder bit earlier...?). Heck - even 15 knots can cause trouble, especially when a 20 knot puff hits.

By installing tweakers at the base of the Lower shroud on each side, you:
Between these two actions above you massively reduce the propensity to death roll or broach.
(Editor's note: One important thing to try and save a death roll is to not ease the spin sheet when the death roll starts. The normal instinct when a big puff hits is to ease the sheet as the helm bears off downwind. In a broach with big leeward heel this is certainly the right move - dump the sheet to depower! In a death roll however, the boat is almost always already dead downwind, or close, so the helm has nowhere left to turn. Easing the sheet is the normal reflex for the trimmer, but in this situation it will cause the kite to roll out to weather, pulling the boat over even more to weather making the death roll worse, and eventually leading to the spinnaker oscillation discussed above. You can actually see this happening in the excellent sequence of photos above - the kite is way out to weather in shots #2, #3, and #4 compared to in #1. So if the boat starts to roll hard to weather in big breeze - hold that sheet tight!)

Now, on to the specifics of how to rig these tweakers, illustrated by a series of photos: 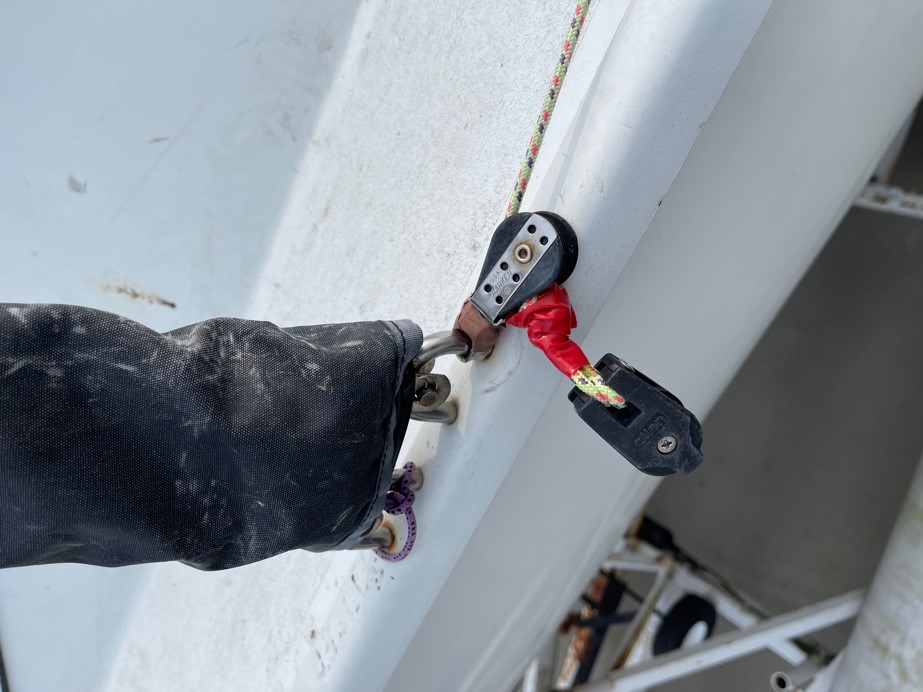 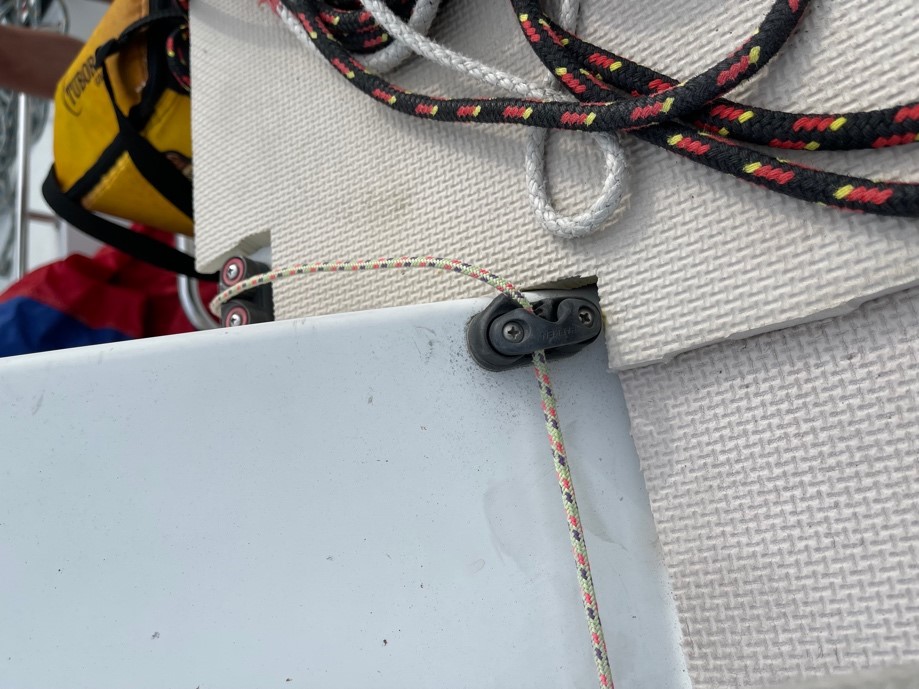 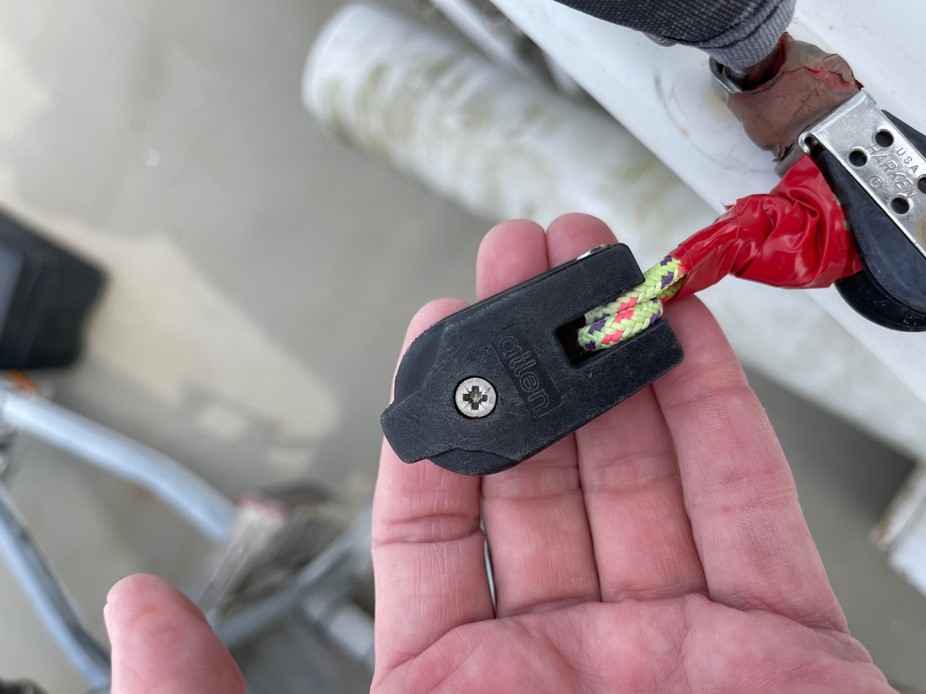 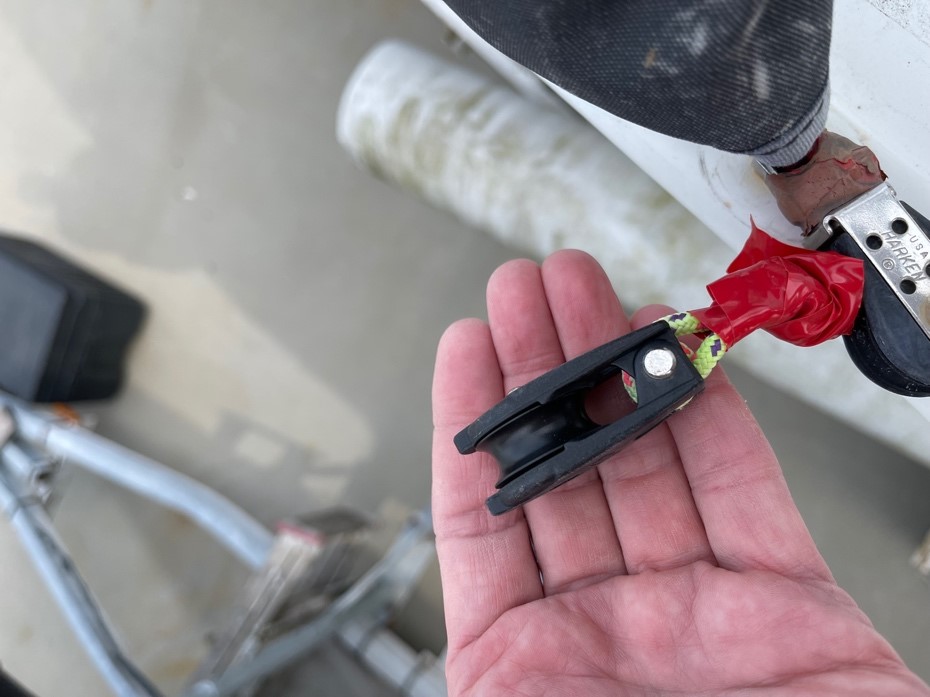 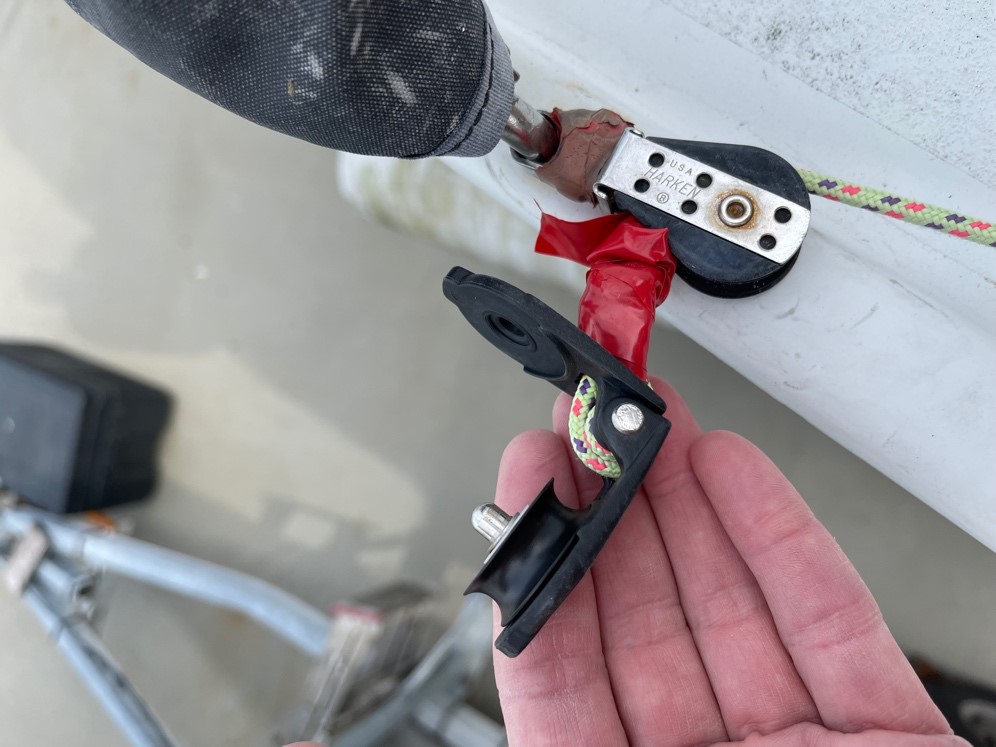 Post Script:
For our viewing audience it is worthwhile to point out that in Los Angeles Martin 242's don't use a foreguy because of the big rolling waves downwind, which requires the pole to be rapidly and repeatedly moved fore and aft, so a pole downhaul would slow that process down. Instead they tend to use tweakers all the time. In contrast, due to flatter wave conditions and habit, in the Pacific Northwest every boat uses a pole downhaul and rarely uses tweakers. But I'm sure they have their fair share of windward death rolls and leeward broaches anyway 🙃