The race planning on m&m was minimal but finite. I read all the same materials/forecasts everyone read along with all aviation forecasts in the area which tend to be a little more accurate hour to hour…but here’s the thing: still a sailboat race and there’s still variables I wasn’t able to plan for. I didn’t know where the placement of the start line would be, and I didn’t know if the children would have to pee in the bucket at all during the race. I’m confident that I will lean on my sailing skills and likely have a knot in my stomach all day.

Off the dock strategy: don’t talk to anyone about strategy. Done get caught changing my mind. Stay the course and do the race I planned. Make sure the kids pee twice, and one of those pees be RIGHT before we launch the boat. Oh yeah, tell Erica that I plan to sail east first as the wind is good right now and who knows how well that will last throughout the race. I figure 1 hr of time to sail to N-Van, then to the barge tie up. From there that should be about 12:00 for a nice spinnaker run on a reach right across the bay to passage island through S\F line with the tide with us. Then hit slack at passage and b-line for the bellboy as it starts to flood. We should catch full on flood from the bellboy up to the finish about when the wind is supposed to turn off. Fingers crossed everyone gets screwed up at Kits in a hole. /end strategy. Erica says she’s sailed this race many times and that’s not the way they usually do it. Crap. Now I look stupid…but I have a plan.

Sailing to the course we found a green frisbee in the water and practiced a man overboard drill. Excellent idea. Less plastic in the ocean and now we have a new frisbee. We decide we are going to win today.

At the start line: how the heck do we check in? Can that be done verbally by passing the committee boat? What was that radio channel in the SI’s again? Oh crap there goes the start sequence. Oh crap the velocitek battery just died. Kids: happy and wanting to eat doughnuts already. After some brief fouls from larger phrf wallies on port tack, off the line with good speed. Back in Black is bearing away behind us and putting up their kite! Now where’s that mark in N-Van? Holy crap everyone is going the other way!!! What did I do wrong? Don’t they know this is the fast way? Ah heck, we already decided this was going to be a win, let’s gooo!

The race continues. We follow a fast big boat which seems a little erratic with its course…oh that’s just rip tide from 1st narrows. Cool! Oh there’s the mark! Carry on, adjust course a little for best estimates VMG. Round the mark and stay on starboard for a bit to make sure we don’t get run over by that big black boat right behind us, tack in a clean lane and head for the Kits Barge Buoy. We make a strategic plan: we should be at the barge buoy by close to noon. No doritos until proper lunches are eaten. Doughnuts for desert for the kids…orrr maybe doughnuts 🍩 are appetizers? This will be a fun debate.

Barge buoy: Val keeps complaining she’s hungry and can’t wait to pass the barge. Doughnuts 🍩 appear to be appetizers. At first we have a ton of North in the wind and look to be laying the upwind (east) side of the barge…crack off to reach more. Crap, tide took us and wind changed direction and went right. That’s ok. We’ll round to port. No Val, no Doritos yet. Tack onto starboard in LIGHT air…too impatient, can’t get around the barge. Tack again and again. Starboard! That big black boat meets us nose to nose at the top of the mark (east end). Ok, wave at the other boats and put the kite up. Erica and I do everything cause the girls dove down below to get sandwiches. No problem, pole set, kite up, I’m flying the sails and Erica is tidying up. Turn on some music, enjoy lunch and a spinnaker run all the way through the bay. Hey this feels good! Self doubt is very apparent as we sail through the bay basicallly solo. That black boat fades into the distance as we chase a J109 and I think a J35.

Start Finish area: wave at the race committee. They wave back. Check in via radio. Hey that went well. Doritos are now open, kids are turning a shade of nacho cheese.

Passage island: tide line is at 100m off end of lighthouse park, outgoing water from howe sound is meeting English bay water. Slack tide is upon us. Hey this is sounding like the plan is actually working. Or is it? Outflow from Howe Sound hits, no longer a spinnaker run, now we are sailing a beat around the north tip of passage island. We are very close to the island…another debate begins about how it’s usually deep water where mooring buoys are…we leave one inches to port and I decide if there’s anything shallow near this island it won’t be nice to hit it. I’ll allow a little more room. Oh this means we can fly the kite again…ok let’s do that. Kite goes back up for the duration of passage island, a gybe and the inflowing current starts. We drift in light breeze east of passage island and pick up the easterly wind again! Oh boy the first boat finishes the race. Wow that seems fast. Mental note it’s 2:18. Lots of self doubt. We talk about how nice it’s been to be on the water…win, loose, or casually sail around. Stay the course, we’re gonna win? More debate about winning with Val…she’s sad someone else crossed the line first but we explain this race is all about time.

Bellboy: we cruise across the bay with the 109 and J35 in the distance. They both sail wildly different courses. J35 way east, J109 way west. But where’s that bellboy? We talk about where it usually is on the Lawrence cup…ah ha! I spot it in the distance. Val is tired and goes down below for a nap. Ev falls asleep on the starboard aft end of the cockpit using my sweater as a pillow. All is well. Hey! There’s some whales. No wonder the whale watching boats are all here. Too much tide, need to compensate and sail a lower course. I start planning my final move up to the finish. All too clear in my mind was the Lawrence cup of 2021 where I rounded first and finished last. That won’t happen this time! We have a fancy new main and it’s not only fast, but also lucky. Ev wakes up from a food coma, Erica has now had some of her lunch, we video tape the bellboy for Val so she’s not upset when she wakes up. Harden up for a little beat to the finish.

The home stretch: discussion about where this sand bank is…we’ll there’s the last dolphin, let’s not go inside it. Besides…there’s excellent current pushing us in everywhere. Headed on starboard, let’s hit the shore for a lift into the bay with the tide with us. Now where did that start line go? It was next to the pink freighter…ah shit that freighter in under 1st narrows now! Hey do you see any 242 spinnakers? Nope. Anyone near something that looks like a finish line? Nope? Well there was that other freighter with the tugboat next to it…ah there’s the committee boat, oh and there’s Back in Black and their balloon spinnaker! Oh man we’re moving great guns toward the finish and they look parked! Hope this breeze hangs in there to get across the finish first! We are convinced we will win now! Ok, tack onto starboard, face the foils to the inflowing water, let’s go! Kids: no more questions till we finish the race. Not even sailing questions. A few shifts, a couple tacks and we cross the finish line to proudly report on the radio “first Martin 242 finished”. High fives all around! Some celebratory water is consumed, furl the jib, flip down the motor, tidy up the boat and start motoring back to KYC because the wind looks DEAD!

On the motor home: oh hey, there's Back in Black. Yell to Reto “hey buddy, you went the wrong way!” Giggles all around. There’s Sailiant a ways behind Reto…oh man I’m kinda glad we sailed on our own. I feel much less stressed than round Bowen with similar elapsed time for the race. Spinnaker is out of the way and stowed down below, sheets are getting coiled…oh here there’s Simply Red! Wave 👋. Hi guys! Oh man they have no wind. Poor guys. Glad we sailed that leg when there was wind and tide with us!

Haul out at KYC, wash down and put everything away, sit on the patio having snacks of Timmies muffins and Doritos and see sooooo many boats still trying to finish! Phew 😮‍💨 glad that isn’t us! I’m sure the kids would be killing each other if we were still out there.

Prize giving: hey we won! Cool Beans!! And 4th overall!! Aaaaand we got some great prizes, cool metal mugs, free dinner, some drinks, some door prizes, and a whole lot of smiles! Good times! I’m literally on cloud nine as the plan was well executed albeit being very heavily debated in my mind (and sometimes aloud) all along. A win with my kiddies…so cool considering we registered for the race the night before at 8pm while I was flying home from YVR to Pitt Meadows. So fitting this race is called the scramble! 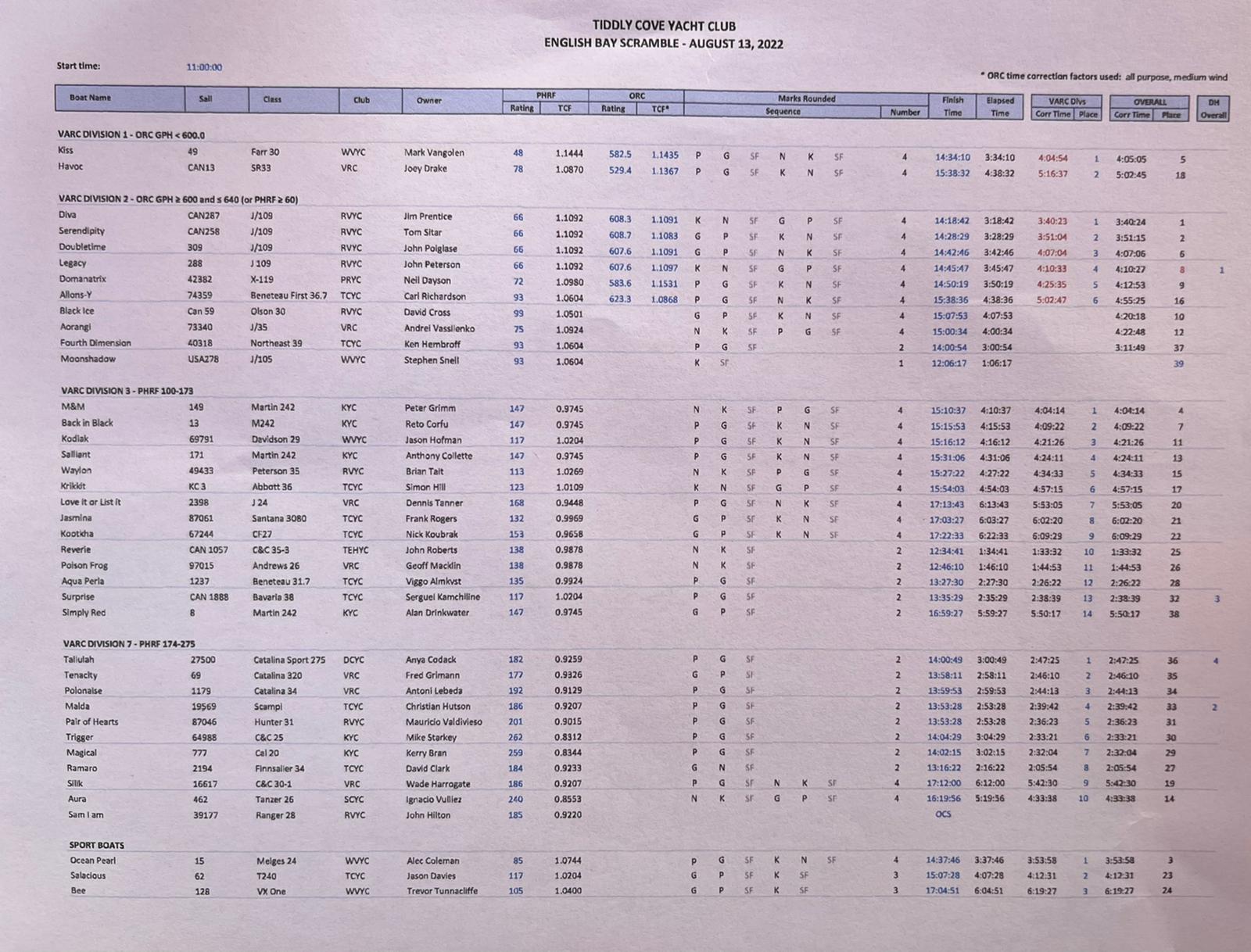 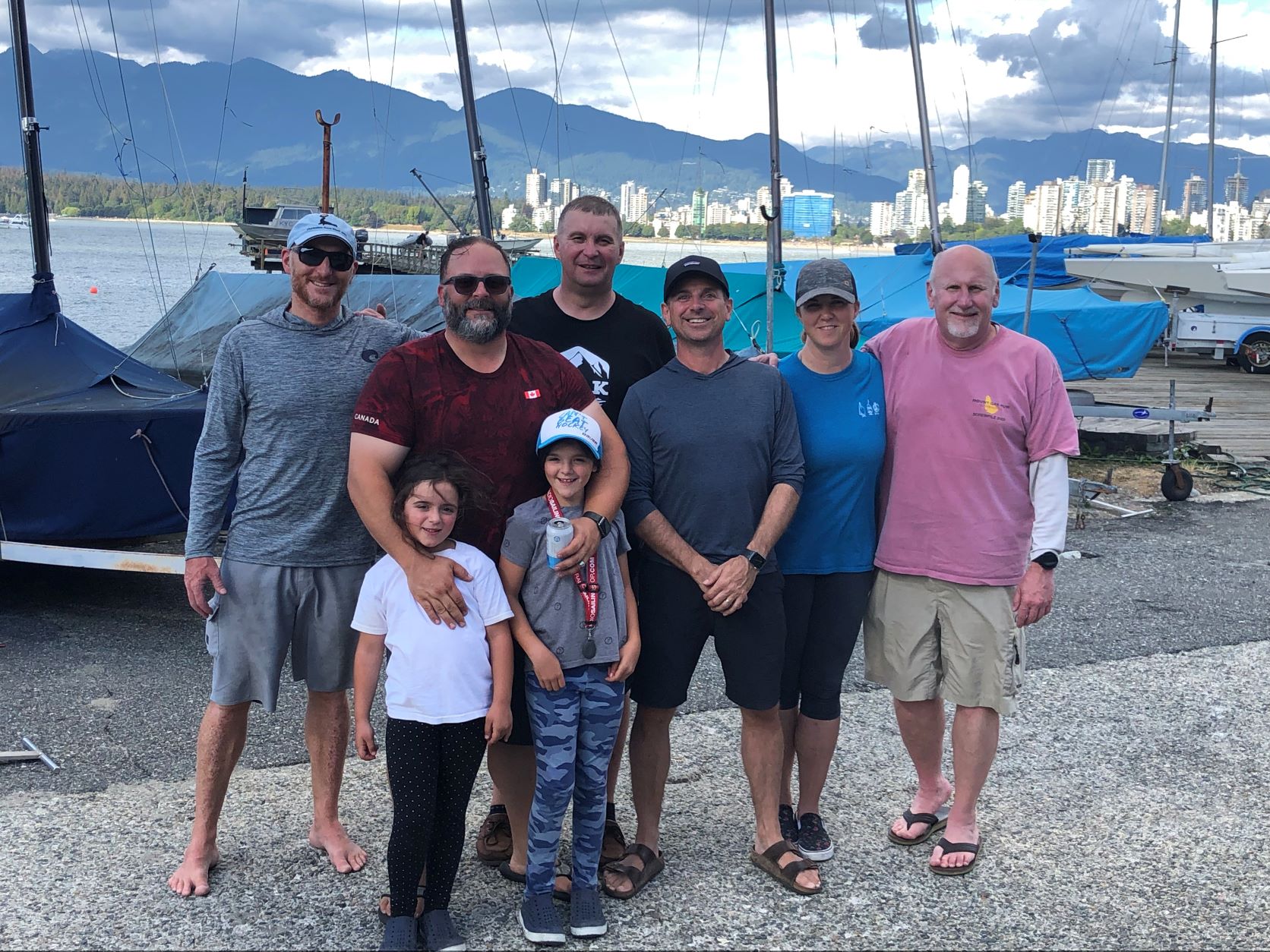 teams m&m and Back in Black after racing