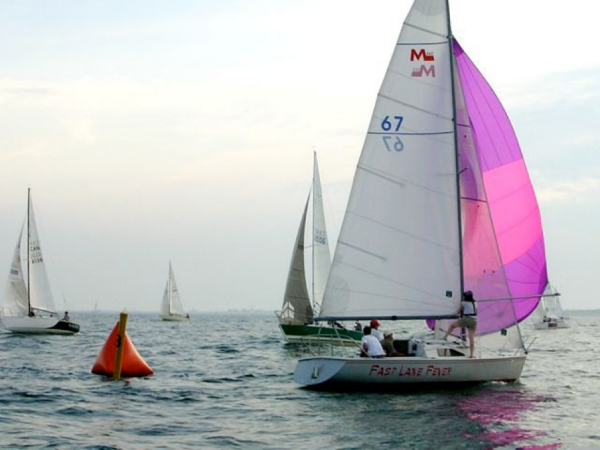 On November 12th, the 12th boat of 2020 changed hands: John Chittley of Ashbridge’s Bay Yacht Club in Toronto, Ontario, sold Fast Lane Fever, #67, to Brent Hughes and Alexandra Cox, both members of Frenchman’s Bay YC in Pickering Ontario, and Trident YC in Gananoque, Ontario. They trailered her home on Saturday November 14 for a winter fluff and buff in their winter warehouse in Pickering. 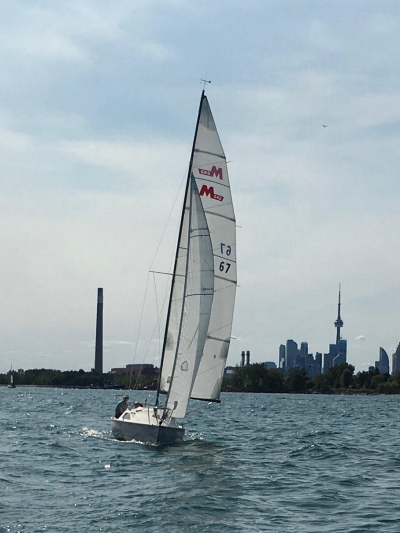 Brent and Alexandra have both been avid sailors and racers their entire lives, growing up sailing only 8nm apart on Lake Ontario, but not meeting until well into their 40’s!

Between them they have owned over 10 boats throughout their lives including a 1974 C&C 35 Mark 2, which Brent has owned for 17 seasons now.

The C&C35 is now kept and cruised out of Trident YC in Gananoque, but they’d been looking for a fast, fun and affordable pocket racer to keep them active during the week at Frenchman’s Bay Yacht Club. They’ve owned a Kirby 25, a J24, and a J27, among other boats, and both of them have sailed against Martin 242’s throughout their lives, so they were THRILLED to find Fast Lane for sale on Wednesday night (Nov 11), only 25 km from home!

In only 2 days the boat was seen, purchased, untarped, and emptied out of all gear. The trailer was serviced in the yard first thing Saturday morning (Nov 14) and FLF was moved to their business in Pickering and tucked away, all in less than 48 hours.

Brent and Alex are looking forward to getting their Fast Lane Family of three teenagers up to speed over the winter, reading up on as much M242 information as they can on the M242 PNW Regional website. "Launch Day can’t come soon enough", says Brent, and he's “looking forward to 2021!!!!”

The boat was listed for CDN$9,500, and with a grey hull it is in very good condition and needs a 2016-version Measurement Certificate. The entire deck was redone in 2013 along with new windows, and new cabin cushions were made in 2018. The boat came with:

Welcome to the Canadian Fleet, Brent & Alexandra, and enjoy your first 242!

On November 1st, the 11th boat of 2020 changed hands (10th in the Pacific Northwest Region): Ben Pliska of Royal Vancouver Yacht Club sold Dingo (ex-Blackadder 2.0), #2092, to James Volkers, who will race it out of Comox. James previously owned a 242 back in the 1990's and has competed in prior North Americans, and he plans to race Dingo in next year's NA's at Nanaimo. This is excellent news, as it continues a recent string of inactive boats getting sold or chartered to keen new owners.

Since Dingo's bottom hadn't been cleaned for over two years, per the attached photos, James is wondering if everyone would let him start 30 seconds ahead of the Fleet in the 2021 NA’s to give him a fighting chance. It seems like a very reasonable request :) 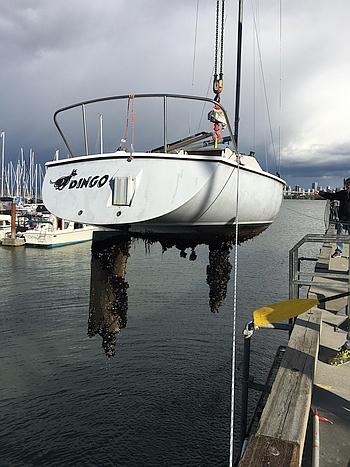 With a light grey hull, it has an excellent race record, coming 2nd overall in the 2016 NA’s. The boat was completely faired and refurbished by Ken Holland to an NA’s race-ready, competitive standard, with epoxy barrier coat and bottom paint. It came with: two sets of sails; a 2016 Measurement Certificate (the boat measured in perfectly); a new full canvas boat cover; and also a new main halyard and jib lines. It did not come with a trailer or a yard dolly, but James subsequently bought a road trailer from Ben Gartside in Sidney 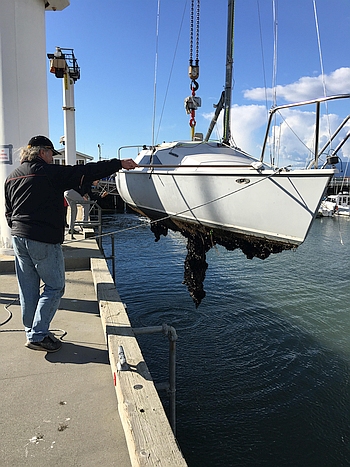 Welcome back to the Fleet, James, and enjoy your second 242!
(p.s: he did get the hull somewhat cleaned at RVYC, per this 3rd photo, so perhaps a 10 second advance start in 2021 would be acceptable) 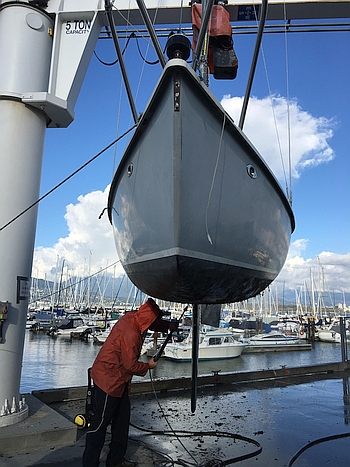 Lastly, here's a photo of James on the right and Ben on the left, just before Dingo left RVYC for Comox: 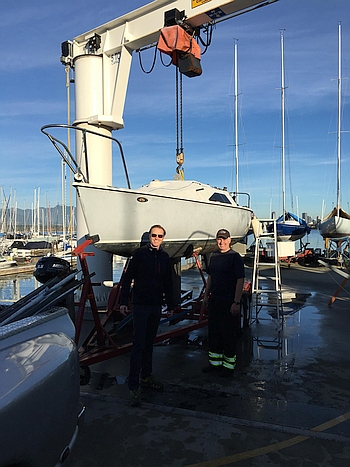 First, if you paid and registered for the 2020 season, your membership will be carried over for the 2021 season.

This is a reminder to everyone who DID NOT register for the 2020 season that memberships and boat registrations can be paid in the late November to January time-frame.. Any skipper competing in the Nanaimo North Americans will need to be a member of a recognized Martin 242 fleet (locally, Fleet 1 or 2).  To join and/or register for 2021, complete the simple form here.

Your skipper and crew membership dues help fund a myriad of Regional Fleet activities, which is one reason we have the biggest and best One Design Class.

Here is hoping for renewed and plague-free racing in 2021!